Making the Most of Technology in the Workplace

While almost everyone these days uses some form of modern tech to benefit their lives, there remain a surprising number of people who continue to resist the influx of technology, and only use it if they have to. On an individual level this is of relatively little consequence, after all how people choose to interact with the world is up to them. Unfortunately, in the business world, this ‘bare-minimum’ approach has the potential to drastically and negatively impact an organisation’s standing. If a company doesn’t have a website, isn’t on social media and doesn’t keep up to date with the latest technology, they are putting themselves at a serious disadvantage. For the majority of businesses this isn’t a pressing issue; they are online and engaged, but with technology changing and updating so rapidly, even the most ‘plugged in’ organisations are at risk of being left behind if they don’t keep their finger on the pulse.

It’s about people not robots

But while keeping up to date is an issue every organisation needs to consider, the real issue they face is not the technology, but how to engage their people in using it. In certain sectors, e.g. technology, you are likely to have no problems in this respect; in fact, employees in this industry are likely to be the ones leading the change, and they will automatically be aligned with these updates.

However, in the wider world of business, technology is simply a tool to support the input, knowledge and expertise of the people and this is where misalignment can cause problems. While businesses are pushing for new technology to remain commercially competitive in terms of outreach; their insistence on using new tech is, in some cases, pushing out the people who hold the expertise to make sure their business continues to function. Tech companies aren’t necessarily helping this problem, as many forms of software have become so ‘clever’ that only the people who developed it actually knows how it all works.

One of the biggest challenges around tech and how people use it is the assumptions made about different generations and their comfort and capability with technology. Despite much evidence to the contrary, there is still a pervading belie that older employees are not as tech-savvy as the younger generation. Similarly, it is not always safe to assume that younger individuals will have expert knowledge in how to use these tools. While most have been brought up using technology, there remain some individuals who are not fully conversant in the many of the applications used in business. And even when people do have knowledge of a certain technology in their personal life, it doesn’t automatically mean they understand how to use it in a business context.

The way forward, therefore, is to focus on the people in your business, understand what they do know and what they don’t, what they are comfortable using and not, and finding out how to use this to maximise their effectiveness in their role, and ensure they can still contribute to the business in an impactful way. After all, there’s little point in having the latest tech to advertise and capture information if you don’t have anyone who can actually do the job your business is known for. 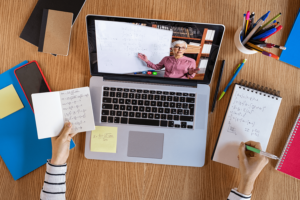 The key to assimilating technology into the workplace is to ensure people have the necessary training to enable them to use it properly; the reason most people resist technology is because they don’t fully understand how it works and there is an element of fear due to the unknown. Most people will then do everything they can to avoid this fear, which often transpires into not using technology to its full potential or becoming frustrated when they do have to use it. This then negatively affects their personal performance at work, and consequently the success of the wider business.

With the recent pandemic, for example, many employees have been forced to use video conferencing software, which may be brand new for them. Unfortunately, few companies have taken the time to train their people in using these platforms, so in many video conversations time is still wasted as people try to manipulate the technology to do what they want it to. While this lack of training was understandable to start with due to intense need to address to crisis at hand, the reality is that video conferencing technology will now be a standard part of most businesses. Yet, still few companies have actually trained their staff in its use and are simply under the assumption that everyone must know how it works now, because they’ve been using it for a few months. The truth is that many organisations are likely missing out on valuable functionality because of this oversight.

By implementing a targeted training plan to support people in the use of relevant technologies, individuals will not only feel more confident and comfortable using existing technology for work, they will also usually be more open to emerging technologies too, having proved to themselves that they are capable of learning a new skill, and realising that it isn’t as hard as they perhaps believed.

Training could take the form of workshops, peer to peer learning or formal programmes, but whatever method is used, the focus may initially be on supporting people in using technology more effectively to support their role, but it shouldn’t stop at this. As progress continues to be made in the tech industry, both in existing applications and those being implemented in the future, individuals will need to be constantly updated on these changes, and offered the opportunity to reassess and revise their skills. Only by encouraging a culture of continue learning and progression will a business be able to maintain a constantly high level of effectiveness that makes their employees’ lives easier and contributes to an improved bottom line.

It won’t always work for everyone

Despite an organisation’s efforts to support their employees in this area, there will likely remain a distinct group of employees that continue to disengage with technology, but the majority will gradually change their attitude the more familiar they become with it. For those who remain staunchly against technology, there is little more you can do; working to try and establish them in a role where they don’t have to engage too much with technology may be an option, but in some cases there may have to be a frank discussion about whether the employee is the right fit for the company, and just as importantly, whether the company is the right fit for the employee.

But no matter what business you are in, people are the foundations to its success, and it is only by working in partnership with employees to understand how to use their skills in collaboration with technology, that an organisation will see real success. If the right balance can be established, then the potential for growth, for all involved, really is limitless.