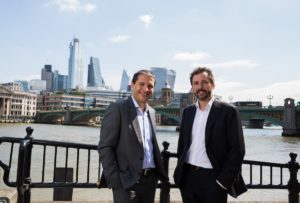 Joe Ales: Welcome to the Underscore Transformation Podcast. This is episode two, my name’s Joe Ales,

Jason West: And I’m Jason West, and today we’re discussing possibly the most important aspect of transformation, and that’s sponsorship. Let’s start with the essence of any decent role description; what’s the purpose of an exec sponsor and what are their key accountabilities and responsibility?

Joe Ales: The sponsor’s role is most critical on the programme, they are the ones that are truly, truly accountable for the outcome of any transformation. These individuals set out the vision and the end state of what the translation is going to look like. So frankly their neck is going to be on the line if the transformation is not managed successfully.

Joe Ales: Taking that into account, Jason, what knowledge experience and skills do you think a sponsor really needs?

Now, in terms of their experience ideally you’d really want somebody that has experience of sponsoring and leading a transformation. But that’s not the always the case. Not everybody has been through a transformation let alone led one. So ideally that’s what you want, but you know there’s a lot that you have to learn on the job. In terms of skills I think there are specific skills that you need. I think maybe we talk more about competencies.  Have you got some thoughts about the type of competencies this person is going to have?

Joe Ales: One of the core competencies from a sponsor; they have to be really authentic, they have to be genuine. People have to believe what the sponsor is saying, and they have to believe in a vision. Not necessarily sometimes agree with it, but these individuals have to be able to lead the business through change.  Transformation programmes aren’t easy to execute. In many cases they are quite disruptive. So the sponsor has got to be able to influence the organisation and actually coalesce the organisation behind why they are trying to achieve. And at times, they may not appeal to everyone’s interests across the exec team.  There might be members of the executive committee that don’t necessarily believe that it’s the right thing to do. But it’s all about having that sense of belief and sense of purpose about what you want to get to.

Jason West: They have to make some tough decisions, some tough calls.

Joe Ales: Absolutely. They’ve got to be able to really articulate, to everyone, why this change is important, what benefit it’s going to drive. And they’re the ones who are going to provide that sense of direction for the entire programme; the programme will be successful largely on the back of the sponsor’s capability to drive the programme and the programme team.

Now that we’ve talked about core competencies, what should you expect ahead of you, if you’re in the position of programme sponsor?

Jason West: I think you’ve got to expect that it’s going to be a lot of hard work. It’s not necessarily long hours, although that comes with the joys of being in an exec position, it’s really those tough decisions. It’s the hard yards. It’s the coalition building. It’s the influencing. It’s what Seth Goden refers to as emotional labour. This is the a really hard stuff; it’s about taking people with you and influencing, and really driving to a better place, a better outcome and having that belief that you’ve [Joe] well-articulated there.

It’s about constantly problem solving. We define a vision, we define where we’re going, and we are really clear about it. But then we need to build support, so during the scoping phase there are so many priorities that organisations have, and you need to understand what are my exec colleagues doing? What are the big change initiatives? What are the big strategic initiatives that we have as a business, and how can I get my programme aligned to one of those particular strategic outcomes we are trying to deliver and get funding, get support, get that kind of coalition of the willing together? So during the scoping phase it’s really about knowing what you are selling. That’s what it’s about: you are selling and building that team of people around you, that’s going to help you get to this place.

Joe Ales: Because frankly if the transformation that you’re trying to achieve isn’t aligned to the business strategy, if it’s not important to anyone except for you it’s not going to get to coalition it needs. So one of the things a sponsor does have to think about is about getting interests aligned across the organisation.

Jason West: And in these roles where do where do people typically fall down in the role of programmes?

Joe Ales: We’ve see it, haven’t we. We’ve seen it in one or two occasions, in many many programmes where the sponsor role wasn’t being performed as effectively as it could have been. And the likely outcome is an unsuccessful programme. And I think there are a number of pitfalls that sponsors need to avoid.

Jason West: So, the sponsor’s delegated the role of sponsor to somebody that reports to them.

Joe Ales: Yes. Or actually, the sponsor isn’t necessarily the one ultimately accountable for the effectiveness of the transformation. So maybe a CFO is a sponsor for a people transformation programme.  Where you’ve got multiple functions, having one sponsor is important and maybe making the right choice between finance sponsor or people sponsor. Or maybe, to your point earlier, maybe you have an external sponsor: a CEO or even a CEO for instance, in some businesses

Jason West: I think we’ve also come across situations where there are two sponsors for a programme, and obviously the more people that are accountable the less people are accountable. I don’t think we’ve ever really seen it work. Sometimes during the scoping phase, whilst we’re not really sure who is ultimately going to sponsor this program, having more than one sponsor is just about manageable. But crikey, when you get to implementation, if there’s not one individual who is holding themselves to account, and is being held to account by the board for delivering the outcome, I have no confidence in that as a sensible governance structure.

Joe Ales: It just makes it difficult if you’ve got two individuals that you’ve got to seek opinion, from unless those two individuals are absolutely joined at the hip, and have the the exact same mindset and the same sort of vision, then perhaps it can be successful with two different people. But that doesn’t often happen.

Joe Ales: Yes. Typically, you will have two individuals with two different sets of of interests and ultimately ambitions and goals. And there is a chance that the programme team who sitting beneath the sponsors will get two different sides of the story, and then it just creates confusion and havoc, causes delays to projects, unhappy people and the likelihood of the programme being successful is low.

Jason West: So, I think perhaps if we just leave on some thoughts really, some advice for program sponsors, perhaps new into the role. There’s a number of really critical points to consider here, and the first one is about how you resource your programme and your project teams. And the first piece of advice is really resource those teams like your career depends on it. Because there’s a very good chance that it does. The way you go about resourcing those teams, the decisions you make about the external consultants you bring in, the roles on that programme team that you’re reserving for members of your permanent operational team, is critical those decisions. Also, where you’re bringing in contractors, we see it’s so often on these transformation programmes, where there’s literally a brief description in a phone call, that I need a programme manager that has delivered this type of project before, with this type of program before, and they need to have this experience in that experience and we want to pay £1200 a day. That’s it. There’s no job description, there’s no role profile. There’s certainly no competencies attached to it. There’s no real selection process beyond a chat and an unstructured interview, and if you think about how much impact these people in these roles are going to have on your personal standing in the organisation and career, I think it’s something that actually spending a bit more time and attention on, who you’re bringing in to deliver these programmes, is probably time well spent.

The other thing is around design decisions. And to your point, Joe, getting into the detail and really understanding those critical design decisions, and what that’s going to mean in the real world – so making sure that you’re championing the experience of your users out there, so the customers of your service, whether they’re external customers or internal customers. The decisions that are being taken are, yes going to deliver your business case, and yes going to comply with your design principles you layout. But also that they are going to have a positive impact on people that are engaging in the process  that you put in place, the systems and the teams that are out there.

The other thing is to be really mindful of risks and issues and really drill down into those areas of risk on a programme and making sure that if somebody’s reporting something as an issue, that something is actually going wrong they’ve got really meaningful mitigation plans in place to deal with that. Just understanding the difference between risk and issue, that’s kind of a good place to start. And it’s surprising how many programme sponsors don’t know what the differences are; risk being something that hasn’t happened yet that’s avoidable that we could take steps and it won’t become a problem, an issue is a problem that exists and it is causing pain today. So really important to kind of focus on those areas during steering committee meetings, and the like. And also be utterly demanding within the programme of your program team and of your senior leadership team be utterly demanding, to get the best possible outcome for the business, for your team, for your customers that you serve. But temper that with absolutely championing your team to the wider business. You’re going through change, things are going to get difficult business operation in your day to day operation is going to get worse before they get better. Really providing that cover, and that support, and championing your team and the change is absolutely critical. You can do both: you can be externally championing and defensive,  but internally critical and robust. So they’re the key takeaways, I think for me, that you know if I could sit down with any sponsor and say “you know before we begin I’d really like to go over these points and just make sure we’re all aligned”.

Joe Ales: So, we would love to hear your feedback perhaps your programme sponsor and looking for some support, or maybe you’re a program team tasked with delivering transformation change, or even perhaps somebody who is exposed to transformation. Please contact the show via our WhatApps Group, or via our website, underscore-group.com. And if you like the podcast, please remember to like and share via your favourite podcast platform.

Next week, we will be publishing episode three, where we’ll be discussing the next critical success factor: problem definition.